Go on a captivating journey with Odyle Knight as she shares her amazing experiences in Bali, and reveals the mystical undercurrent of the ‘Island of the gods’, in her three enthralling autobiographical books. Her third book in this series, Bali Hai – A Woman’s Journey will be launched soon.

In a new slant, Odyle’s passion for astrology is captured in her latest book, Hippos Eat Grass – Busting the Fat Myth, a refreshing look at the weighty subject of beauty. It exposes the myths associated with shape and size and allows the reader to accept the truth of their own beauty and shine.
NOW RELEASED, go to amazon.com to view. 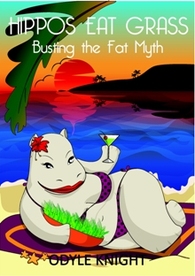 Size is one of the most blatant forms of discrimination that exists in our society today. Large people have become invisible, yet they are among some of the most beautiful people on the planet. We are fed the myth that size is determined by food and exercise, but in reality we are more the product of our genetics, metabolism and astrological patterns. We are exactly as we were intended, and we are perfect just the way we are.

"Now I ask you. When Noah was receiving instructions from God on how to save the world by building an ark and taking on board two of every animal species, did God discriminate? Did he say, leave the fat ones behind? Did he ask them to step on a scale to see if they were worth saving? No, he loved them all equally as they were his creation."

Just like the animal kingdom, people are created differently. It is this variety that ensures each person is unique and our world remains interesting and diverse. The pressure to conform to a unrealistic thin stereotype has caused people to become depressed, demoralised and diminished. This must stop. It is time to revel in our beauty, whatever shape that may be.

So for all of those stunning, sexy, cuddly, curvaceous, voluptuous and generous sized people who love how they look, or who could learn to, this book is for you.

It’s time to stand up and be noticed. 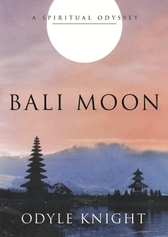 Bali Moon - A Spiritual Odyssey tells of a woman's amazing experiences on the exotic island of Bali. Drawn by a strange destiny, she falls in love with a Balinese priest and mystic and is plunged into an arcane realm of magic and the supernatural, terrifying and yet mystifying.

Given a window into a far distant reality, the author is led on an exciting journey, one steeped in drama and suspense that propels her to the far reaches of the islands of Indonesia. Ultimately it guides her to reflection and personal enlightenment.

Bali Moon is all the more compelling because it is based entirely on fact, strange and exciting twists along the way prove that indeed truth is stranger than fiction. Click Here to purchase Bali Moon. 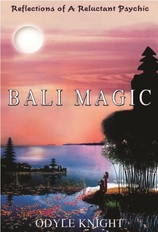 Bali Magic - Reflections of a Reluctant Psychic continues the journey and relates the author's extraordinary experiences on the mystical island of Bali. Set against a rich tapestry of Indonesian history, legends and myths, and the intriguing world of magic, Bali Magic is truly a remarkable and inspiring story.

The author shares her experiences as she meets with royals, mystics and political leaders. Led on a remarkable quest, she is privileged to gaze upon ancient treasures and so discovers a mythical reality that few are ever given the opportunity to witness. Her encounters with spirits including the Goddess of the South Seas and those of ancient heroes and modern day presidents are as baffling as they are fascinating.

Meshed in a dramatic love triangle, she is challenged to draw upon her inner strength and her timeless connection to this magical island in order to survive. Click Here to purchase Bali Magic. 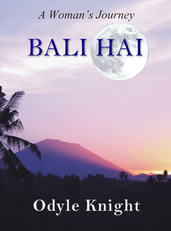 Bali Hai – A Woman’s Journey is the third book in the remarkable trilogy that recounts Odyle Knight’s amazing life journey on the island of Bali. The dramatic conclusion leaves no doubt as to the spiritual presence that abounds on the ‘Island of the Gods’ while the author’s resolution and courage will inspire others to embark on their own journey of discovery.

Touched by mystical interludes that take place at an ancient temple in the rice fields near Ubud and the rim of an active volcano in Java, Odyle once again uncovers the spiritual side of herself and Bali. Her travels take her across the fascinating eastern islands of Indonesia, to Lombok, Sumbawa, Komodo and Flores. A love triangle between her Hindu priest partner and a much younger Balinese man reveals a bizarre karmic connection.

However a greater destiny is revealed after a surprise reunion in Java with a Balinese man who was once her spiritual mentor years before. The final pieces of the puzzle are uncovered when Odyle is summoned by one of the country’s foremost spiritual gurus which ultimately lead to a meeting with the esteemed daughter of the first president of Indonesia, Sukarno.

A journalist at the press conference held for Odyle in Jakarta summed up her journey perfectly. “Odyle’s forefathers from Greece came from a strong culture with matriarchal elements thus her position as a strong woman among strong men does not come as a surprise.”

And what a truly remarkable journey it was. TO BE RELEASED SOON.